This is deeply personal and I’ve thought about this from the day I started this blog. I have shared openly and honestly our thoughts, lives and letters and yet I’ve considered keeping this one last letter private. I have decided to share only parts of it, others parts of it I will keep to myself. As J himself wrote parts of this letter are “flippant and cruel.”

I can’t write about the night I was woken to be told. I don’t have the words, the eloquence, I wish I did but I’m just not my brother.

J locked his bedroom door from the inside and posted this last letter under his door out into the hallway.

WARNING: The following are excerpts of J’s suicide letter and the coroners report detailing the findings of the investigation into his death. This is not easy reading and I ask you to think carefully if you wish to read it at all and to remind you that you do not have to finish reading it if you do start it.

You know, I wrote one of these a while ago, a good one, but I’ve lost it now, so this will have to do. First of all, I want to say how sorry I am. I really am sorry. I’m sorry I’ve done this to you, but I just couldn’t keep going. I really couldn’t. I’m so, so sorry.

This is not just a depression thing, it’s something I’ve always thought: what’s the point? You can say we’re here to have a good time, to do good unto others, etc., but that’s all window dressing to me. I really can’t see a point in it all -I’m a bit of a nihilist perhaps. I firmly believe that it’s only a matter of time before everything falls apart for me. I can feel it happening already – I have the most terrible sense of being cornered, of having no way out. My personal life is pretty much destroyed. I alienate people by being an arsehole. This is nothing that I hold against anyone, I wouldn’t want to hang around with me either. In fact, I don’t want to hang around with me, and knocking myself off seems to be the only solution to this vexing problem. I was going to just disappear, but I’ve found I can’t bring myself to do it, things have reached a crisis point where if I don’t do it properly then I’m going to do something stupid like impulsively jump in front of a train. I’m most sorry for whoever finds me – I was originally going to do it somewhere I’d be found by a professional but things just got too hard. But I digress. On with the pointlessness and the hopelessness.

I have no real talents, no skills, nothing to offer. I can fashion a nicely turned email, and that’s about it. It just doesn’t seem enough to warrant being here. I can’t find meaning in life, and I can’t wring any joy out of it. I’m never going to have children and it doesn’t seem that I’m ever going to have another relationship (in the last three years I’ve had two 1-night stands and a six-week fling), so I’ve got nothing to offer other people on that front either. I’m just a cold person; I’m no good at the giving and the sharing and the putting up with someone and all that. I don’t have what it takes.

And my memory! It’s so crap! It kind of makes me feel like a goldfish, mindlessly repeating the same mundane tasks, and never consolidating them, getting something out of them, learning anything. And even if I did, what’s the point in that? Soon (relatively speaking) everyone I know will die, and then there’ll be no record that I was here. (Which incidentally doesn’t seem that monstrous to me, seems right in a way.) Again, I ask: what’s the point? I say forget me, to the scrap heap!

I try to look forward and imagine myself in a year’s time, and I just can’t do it. I can’t see a future for me. I can’t change either, I’ve tried. I tried, but I just don’t have the strength to change, I guess I don’t really have the will to change. That’s the rub, you see. I know that it’s generally frowned upon to kill yourself, but I actually can’t see what’s wrong with it.

And the anxiety and paranoia, ooh Lordy! It’s out of control. Though it’s not psychotic (i.e. I realise that it’s all in my head) it’s bad, and it makes for an unpleasant life -walking down the street, twitching away and looking over my shoulder, crossing the street three times in a block to avoid complete strangers I “don’t like the look of.” It’s that feeling of being cornered, I feel it all the time.

I also have a very palpable sense of impending doom. I have this feeling of everything unravelling, that in the very near future I am about to be uncovered for the fraud I am. It’s like a physical sensation, I have to physically shake myself to clear it, like it’s sticking to me or something. It’s hard, not to mention embarrassing, to be walking around jerking about cos I’m trying to literally shake off this feeling of dread and panic. It’s no way to live. Weirdly, this stuff doesn’t bother me so much when I’m with other people, but stupidly, I can’t stand to be around other people too much. I feel suffocated if I don’t have plenty of time to myself -time to myself to walk about like some demented marionette, twitching this way and that as I walk to the city to see yet another crap film on my own.

I also can’t seem to feel sincere or genuine about anything. I have to always be drunk to take the edge of everything, the feelings of suffocation, embarrassment, distrust, paranoia. But spending time on my own just makes me battier. It’s quite the bind, eh? Too crazy to be with people, too crazy to be alone.

But it’s not just that, I feel like I’ve been so defensive all my life, keeping myself from harm that I can’t function without this facade of glibness and faux apathy, for want of a better word. It’s a certain passionlessness I guess, born of an insecurity so deep and wide. So it’s a combination of laziness, poor mental health, some nasty personality traits and a philosophical malaise, really.

Oh, and this has nothing to do with being a poof, either. I don’t want any dreary stereotypes about how “it’s a lonely life” and “Hmm, yes, they do have a very high rate of suicide, don’t they?” Killing myself  has been my abiding obsession for almost my entire life, and whom I shag (or more appropriately, don’t shag) has nothing to do with it.

There was nothing any of you could have done to prevent this happening.

I want to make sure that no one feels responsible for this. This is down to me, and only me. I’ve wanted to do  this for a very long time. A VERY LONG TIME. I’ve just been too chickenshit to do anything about it. But the balance shifts eventually and you realise that it’s easier to die than it is to go on. (And on, and on and on -how do people do it? It seems amazing to me that more people don’t kill themselves.) I also didn’t send out any “signals” that people “should have” picked up. I didn’t give my stuff away, pay my bills, any of that crap.

And I don’t want anyone to feel like they could have done more, cos this was inevitable, it really was. I think I was programmed for it. I’ve been irresistibly drawn to self-destruction nearly all my life. I know that it’s not the sort of thing that you’re meant to do, but I just couldn’t help it. I’ve thought about killing myself nearly every single day for as long as I can remember. Since primary school. Every day I’ve thought about it, EVERY DAY. Some people think about winning the lottery to solve all their problems,  I thought about sticking my head in the oven. It’s just the way it is. The coin comes up heads or it comes up tails. I’m a miserable git, and that’s just the way it is.

Please chuck out and/or sell all my stuff. Or let people go through it, there might be something that someone wants in particular.

My superannuation should cover the rent until XXXX can find someone or somewhere new. It should also cover the funeral. Please choose the cheapest box they’ve got, OR custom design a REAL FANCY one, with a flaming paint job and a big silver skull and cross-bones and a built-in stereo that plays AC/DC’s “Highway to Hell”.

If there’s one thing I am VERY definite about it is this: NO PRIESTS. I know that the funeral is to help others get over it and all that, but if your lingering memories of me are tainted by some twat in a dress droning from a Bible I swear I will come back and haunt you all. And not in a Casper the friendly fag way, but in an Amityville Horror sort of way.

NO PRIESTS. There must be some secular option – can you rent out a pub for it? And no bloody poems. And no music. Well, if you must, play “Lost Cause” by Beck. It’s from his Sea Change album.

And closed-coffin cremation please. Scatter the ashes down the riverbank in front of the house on XXXXXXXXX Avenue. Oh god, wait a minute … do I really want my ashes spread in Poo Town? Blimey, that IS depressing. Yeah, the riverbank will do. Fuck it. But don’t have the funeral in POO Town, have it in Richmond. And under NO CIRCUMSTANCES am I to be buried at Hazelwood.

If you  have to have a plaque or something, use the inscription  “Do your crying in the rain”. I’ve always been fond of that.

So, err, so long. Thanks for everything, and sorry for everything. I wish I could have been a better friend/boyfriend/son/brother, but you can only work with what you’ve got. It never would have worked out. 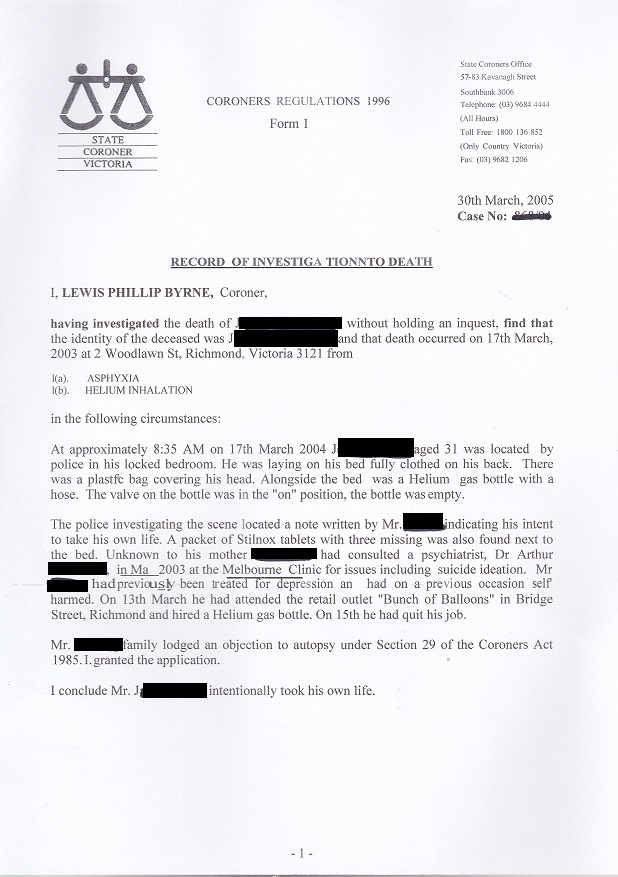 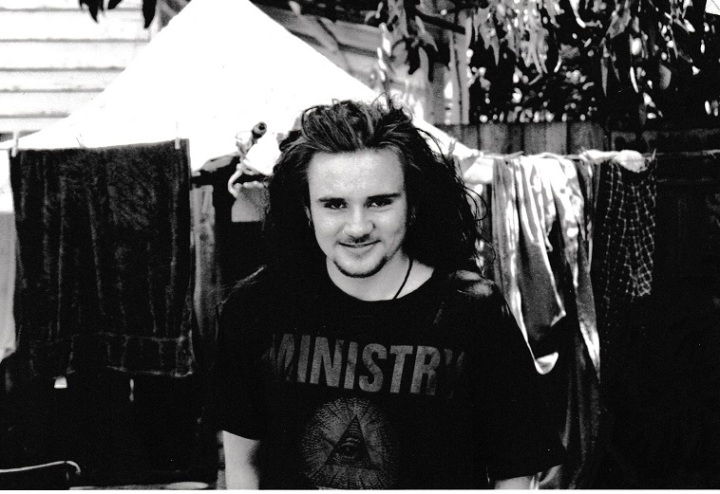