I found this amongst J’s paperwork.  It is a copy of a letter to an ex-colleague Tariq who was travelling overseas.

So here it is, you thought I’d forgotten you, huh? It’s just that I seem to have lost the knack for letter writing.  But how are you doing?  Picked up that Murdoch kowtowing job yet? Wrap your lips ’round the corporate phallus and get that warm meal, Sonny.  England is a cold, cold country.  Myself, I’ve been living in the land of love, skipping through poppy fields and kicking up my heals in the autumnal blanket of elm leaves in city parks, throwing my beret in the air and singing the theme from Laverne & Shirley – “(I’m) gonna make it all after aaaa-ll,” ‘Tis a many splendored thing, y’all.

Bought a Sony PlayStation yesterday.  I had to.  I was so depressed (with no good reason) I told myself only an impulse purchase would lighten my heart.  I couldn’t choose between the PlayStation and a comprehensive collection of pornography, but I figured it was RSI either way.  I opted for the PlayStation, bought a nasty violent game and squandered another night of my youth spin-kicking my blues away.  I think I’ll get sick of it in a couple of weeks.  I don’t have the attention span for genuine obsession.

I suppose I ought to add that the boss is away at the moment.  Noah is in New York, a ten day vacation in the Tri-State Spring.  The mood here is of barely contained chaos – a bag of microwave popcorn ready to blow. The once whispers of sedition are now tea-room proclamations.  Edith has recorded the Marseillaise as the new hold music and Cain is busy wiring up a suicide bomb on the fifth floor.  Actually it’s pretty much business as usual.  Our neural inhibitor implants see to that.

Pippa was in yesterday.  She asked after you. Not.  She seems to be careening along in her traditional fashion.  Noah’s trying to underpay her for her piece (10¢ a word, luvvie) in ‘Who’.  Freya is having a party on the weekend to which I was not invited. (Humph!)  Not like I wanted to go anyway.  Who the hell ever has a good time at parties anyway?  I hate them and in fact am scheming to extricate myself from one this very evening. Dean, an old school chum, is having a party at his place in South Yarra.  He’ll be the only person there I know.  I don’t like those odds so I’m working on an excuse – ‘Maaate, I’m sorry as hell about not making it to yer party.  I was having pre-party drinks with a workmate and she had this ugly-ass meltdown and started blubbering at the bar.  I had to see the walrus home, godammit.  And by the time I escaped from her North Melbourne chamber of horrors I was late, tear-stained and not really in the mood, you know?’ Whaddya think?  Sound convincing?  All I really wanna do is go home and kick the crap out of some guy in a leopard mask on my PlayStation.  I officially have no life.

That’s not really true.  Being paired off has invigorated me somewhat.  When you spread out on the couch at home on your own, it rarely occurs to you that you’re being feeble and dingy.  When you’re lounging there with someone else, the tedium of your life is more apparent.  I sit there thinking ‘J, you’re being piss-dull. Say something exciting, inflammatory….’  So I’ve started with baby-steps; the National Gallery, films, restaurants, and now plan a progression to protest marches (‘Abortion on demand!’ ‘No Gulf War!’ ‘Free dental care for our rural population!’ ‘No sex before marriage!’) and exciting personal hobbies like skeet shooting, postcode memorization and reflexology.  How the fuck does one make oneself interesting? I’ve got no clue at all.  As you may have guessed.  you’re lucky, you’re now a foreigner; intrinsically interesting.  Only have to open your mouth and say something colorfully colonial to garner a crowd of fascinated onlookers.  You know one of my personalities is a Belgian pirate, perhaps I should let him out more often.  ‘A-hargh! Jean-Claude, double the men’s chocolate ration and trim sails for the Congo.  Slaves for everyone!’

I should pass on the news that works netball team (named ‘The Ravlics’) recorded their first victory last Thursday night at the Burnley Netball Arena: 18 to 4. Centre Igor had this to say “We smoked their bitch asses.”

Well amusing as works’ sporting follies and fragmentation of my Jerry-built persona may be, I really must end this here and get back to work.  Admittedly there’s no whip at my back, but I feel a creepy obligation to refrain from fucking up while the boss is away and confirming his worst fears. 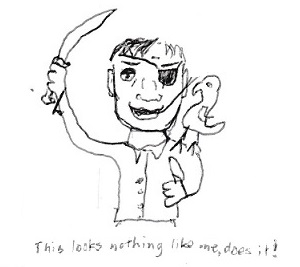