S, Thursday morning and the Monster Letter is gone, now it’s back to the regular routine.  Unless you prefer these in Monster format.  Lemme know. So what am I thinking about today?  Well, finished “The Age of Reason” so there’ll be no more ruminating on Past and Future.  However, I did see this groovy thing on TV about the end of the universe.  I’ve got to tell you about this, it’s great.

You see, there are two ways it’s gonna go.  The Big Freeze or the Big Crunch.  Let’s start at the beginning.  We have the Big Bang right? Everything in the universe is condensed into an object about the size of a baseball bat.  Then for some reason it explodes and lets out all this energy.  So right now, the universe is still expanding from that Bang.  Now, all the matter (M) that’s in the universe has it’s own gravity pulling it towards each other, so that’s slowing down the expansion.  The question is, is the gravity of that matter enough to stop the expansion?

So let’s say the expanding power of the Big Bang is 1 (BB=1), so the amount of matter required of the universe to bring its expansion to a halt is also 1. If the matter is more than 1, then the gravity of it will cause the universe to contract back into the baseball bat, and the whole thing starts again.  If the matter in the universe is less than 1, then the universe will just keep on expanding and thinning out.  This means that all the energy from the Big Bang will dissipate, and eventually everything will just freeze up.

At the moment, scientist have figured out that there is nowhere near enough matter to cause a Big Crunch (M>1). This is a bit disturbing, just think of everything spreading out thinly and freezing up, no renewal, no second chances…. So what do you think the scientist are trying to do? They’re looking for more matter.  They reckon there must be some more somewhere that they can’t see yet.  How romantic.  It’s almost like they’re human isn’t it? Hope springs eternal.

I might have some of this a bit skewiff, but that’s the general gist of it.  Which way do you hope it goes?  I mean, it’s not out of the question that humans could survive a Big Freeze, maybe by then they’ll be able to genetically adapt to it, perhaps they’ll concentrate some corner of the cosmos and create a little grotto for humans, if we’re still humans by then.  Maybe the lizards will take over, maybe social workers.

It’s Simon’s second last day at work. Giggles brought in two chocolate cakes. Simon and I tried to flog them off for 50cents a slice, but Giggles blabbed and we had to share.  Sharing always makes me feel like some Commie.  I guess it’ll be drinks over the road tomorrow night, Simon’s big going-away session.  I wonder if he’ll venture off the light beer?  He’s so cautious when it comes to drinking.  I’ve only seen him shit-faced once, and even then he could still stand up straight.  I’ll bet he’s a drunk nudist, you know the type – three drinks and off it comes.

Just met Mum for lunch.  Had a delicious vegetarian bagel, scones and a strong coffee that really packed a buzzy wallop.  Mum was well, I was trying to convince her to leave “Poo Town”, move bay side and go into business with lesbian mustard manufacturers.  Well I think it’s a good idea.  She asked me if the musty smell in the carpet near my front door was from “someone smoking funny stuff”.  I giggled and denied it.  It’s true you know, ain’t none of that going on in my house no more, left all that behind in Richmond. I said that maybe the people who were there before me had spilt a bong there, but we couldn’t be sure.  Good God S, Mum knew what a bong was.  Hell, she’s probably Queen Ganja of the West.  I can see her with a dreadlock wig and a Bob Marley T-shirt with a foot long spliff and slitted bloodshot eyes saying “Blessed be the Herb, mon.”

Giggles has gone, she only works three days a week, so this was the last time she’d be seeing Simon until he gets back.  I tried to make her give him a kiss, but no luck, She wouldn’t even give him a hickie. 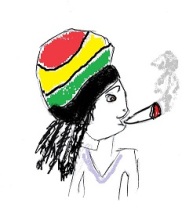