Bright bright morning, sun in my eyes on the tram.  No Summer clothes, coffee drunk too quickly scalding my lips and tongue.  A rushed start to the day.

I’ve decided to become one of those despicable early to bed and early to rise people.  I wanna wake with the Summer dawn and feel righteous every day.  Maybe this is an echo of Sunday’s cleaning frenzy, who knows?  I wanna be on top of things.  I wanna do a good job, offer my seat on the tram to old people (I’m always too embarrassed to do that), pick up litter in the street, all that stuff.  Do you ever feel like you’re all old and used up and cynical before your time?  Maybe it’s just Spring on the way making me all nostalgic for purer times past.  What I’d really like is to be so swotty and perfect that I could never be embarrassed ever again.

Leah’s found a new house in Carlton.  She came over last night to get some of the stuff she stored at my house.  This means that she won’t be coming over as much now, which I am – of course – in two minds about. First Mind: It’ll be good to get my privacy back, especially on weekends. I won’t be hassled as much to go out to crappy nightclubs, I won’t be led into temptations – brothers and sisters, can you give me an Hallelujah?!!   Second Mind: It’ll be a drag having to haul my wobbly old ass over to Carlton to visit.  I’m just bone lazy and really value inactivity more highly than friendships. God, what a revelation!  And Leah will really bug me to visit too.  Also she’s laying into me big time (as the saying goes) to help her move.  I am standing firm on this one, she has two burly blokes (Aidan the boyfriend and Tom the brother) to assist, and helping people shift, even myself, is about my least favourite thing to do, including getting my hair cut in a hair salon. Well, there’s my Two Minds, which are definitely not better than one.  Two Minds require much more maintenance.

OH MY GOD!!  I’ve forgotten to tell you the most exciting thing!  I was approached at the train station last night by… a girl!  Brown trousers time I can tell you.  I was standing slightly in front of the wall, right under the TV screen so I could see in my myopic haze which train was coming next, so there was another stratum of people behind me leaning against the wall.  So I’m standing there in the windy approach of the Broadmeadows Line when I hear this voice from behind intone “Excuse me, but how do you get that earring out of your ear?” It was one of those earrings that screw apart. (I’ll draw you a diagram) and she thought that the ball-bearings had to be squished through the hole in my ear.  I swivelled around and realized it was a girl (these things take time) and that she was not unattractive, and I woodenly explained how it worked.  Then she told me she used to have a nose-ring and can you still see where it used to be, pointing to a nostril. (Nostril is a peculiarly unromantic word, isn’t it?)  My train was coming next, and I had unravelled the mystery of the earring, so I swivelled back around and stared imploringly at the TV monitor, hoping it might make my train come sooner, displayed as it was “departing in 1 minute” – tease!

How long a minute can be when you feel someone’s eyes boring into your back and you can’t think of a thing to say, nor a way to escape!  So I swayed in the tunnel winds, and kept my eyes glued to the screen, and eventually, tens of seconds later, the Train of Salvation glides into view, and I have the horrible, bowel-loosening thought of “What if she gets on the train?  What if she wants to talk to me for the whole ride? What if she gets off at my stop?  Follows me home?  KNOWS WHERE I LIVE?!!”  The train slid to a stop, I got on, sat down, sneaked a glance out the window, and she was still glued to the wall.  Relief steams out of J’s every pore and he is whisked away into the tunnel.  And they all lived happily, separately, every after…. 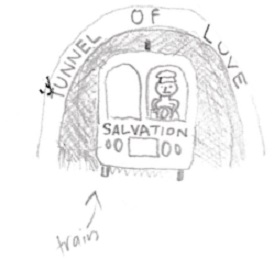 By jingo, what a trooper – still in the office after five.  You know, I think that boy deserves a pay rise.

Spoke to Mum on the phone earlier, she said you might not be coming out ’til later on.  I don’t really mind when you come, I have so many holidays worked up that I could take 3 months off.  And I plan to spend a significant portion of them in genuflection before Man’s greatest triumph – the air-conditioner! Oh yes, I think I’ll just loll about on the sofa eating Kit Kats, Tim Tams and other twice-named confectionery treats (Tic Tacs, M&M’s). I’ve gone off Magnums, the makers of that particular ice-cream have betrayed me, like the makers of Burger Rings, and BBQ Shapes. They’ve changed the flavor, watered it down, using less expensive ingredients.  A curse on them and their petty penny-pinching, corner-cutting, heart-breaking ways.

Oh yeah, exciting gossip! When I was talking to Mum earlier, she told me one of my old teachers, Mr B, is up on child molestation charges! Wow, I’ve been brushed by the great powdered wings of gossip.  I wonder if he really did it.  Mum says the buzz around the industry is that the allegations are true.  He and I never got along terribly well, though he and Josh were quite chummy, and Mr B often loaned Josh records and stuff.  I wonder how Josh will react.  I’m sure he didn’t interfere with Josh, apparently little girls are his thing.  If he is guilty I hope he serves time.  How is it that these people always end up with jobs near kids?  Don’t they test them for fuck’s sake?  He’s married with a kid too.  Apparently he married an ex-student from our school, or was it her sister? I dunno.  Oh yeah, and remember Mr WX, the tennis coach? Lost his job for jumping in the sack with a sixteen year-old. They say that she approached him, like that makes everything perfectly OK.  Goodness me, that old school of ours is just plain bad news, sex-romps, sex-monsters, mass murderers, real estate agents…

Anyway, now I’m gonna go home and try to not watch the TV, remember what I was writing about before, you know – ‘early to bed and early to rise” and all that crap?  I’m gonna give it a whirl, for real.  New J, the slim-line edition, free of vice and habits bad. Alter Boy.

What’s it all about?

One thought on “Well, I’m in two minds about it and let me tell you two minds are not better than one. Two minds require much more maintenance.”