Dad called me at work and just told me you’ve finally named my niece – hell it only took you 9 days!  Brady, (I hope I’ve got the spelling right). That’s really nice, I like Brady.  So how are you coping as a new mother? Is Brady keeping you up ’til all hours? You will have her walking and talking by the time you come over at Christmas, won’t you? I mean, she will be able to hold a conversation and feed and dress and drive herself around won’t she?

It looks like the whole French Nuclear thing is heating up here.  Someone in Perth actually fire-bombed an honorary French Consul’s offices. He was really a doctor (the Honorary Consul that is). He probably caught some Frog from the embassy in the sack with his daughter and they palmed him off with this Honorary Consul thing (which would appeal to some snobby medico), and now his offices have been burnt to the ground. You have to feel a bit sorry for him. Still, that’s what you get for dancing with the devil. Personally, I wish it was a real consulate. How dare those fuckers tell us there’s absolutely no risk to our environment from their filthy bomb testing. If that filthy piece of Gallic deception is really true, why aren’t they doing the testing in France? There are tonnes of tiny islands off the coast of France, do it there, you big-nosed, garlic-stinking, rude sons-and-daughters-of-bitches. I spit on you. There I feel better now. This letter will probably get opened and read by the French Secret Service and I’ll have dodgy looking Peugeots parked outside my house for the next six months.

Another person told me this morning that they’re leaving work. That makes me the second longest serving researcher here. That makes me feel kinda despondent, you know? A bit like the dregs, the left-overs, the straggler. The only way around it is to do some night courses. However, I can’t do night courses until I can drive, so as soon as Mum bets back, I’m gonna take her up on her offer to give me a few lessons. I’ll see if I can’t run over some Frenchmen.

I have to go back to the dentist tomorrow. I bit down on something hard in a packet of cheese and onion chips (serves me right for eating fatty food I guess). Our “Father” is driving me which means I won’t have to take a whole day off work like last time. That sounds bad, but I’ve really got too much to do here to be taking days off. Which reminds me I have to get back to work.

Sketch by J. I know it’s a Holden and not a Peugot but thought it went with the post. 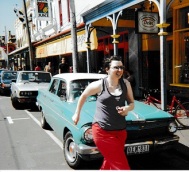 J’s drawing above is based on this photo he took.