My first full-on TV-less night.  And what a blessing.  I don’t think I’ll get the thing fixed, Sis.  I didn’t miss it at all.  And I actually cooked a meal.  A pastry dish.  It was my first filo recipe ever.  I know this is probably inane, but I get a kick out of cooking new dishes, makes me feel a little more grown-up.  It was some broccoli and cottage cheese thing.  It tasted OK, but I put too much orange juice on the filo, it didn’t separate properly.  I read most of that Irvine Welsh book too, “Trainspotting”.  Despite the phonetics, I found it really readable.  Couldn’t put it down in fact.  Read two hundred pages of it yesterday.  I only stopped because it was nearly 2am.  I bought the book yesterday lunchtime, along with Andre Gide’s “The Counterfeiters”.  I imagine the latter won’t be so readable as the former.  Still, I’ll make the most likely premature statement that going on last night’s productivity (re: meal and reading), TV is the great blight of my existence, and it has to be excised from my life.  Maybe I ought to go so far as to remove the fucker from my house.  Can you see me, wild-eyed Luddite zealot, tossing that hulking Phillips TV out on the street arms akimbo, booming ‘Out, out I say.  Begone foul pestilence, boil on my soul!‘

To tell the truth, I’m just too cheap to get the damn thing repaired.  Besides, I’d have to let the repairman into my house, and I hate doing that.  I worry that these tradesmen are casing my joint for a burglary.  I recall quite vividly how carefully I watched the TV antenna guy.  Following his gaze zealously, wondering if he was checking the security measures.  I remember when Mum got the security grill thingies put on the laundry and back windows.  It was just before Easter, but the Greeks and other orthodox folks were hard at it, worshipping and that. The Greek guy who came to do the job was telling me how flat out he was, and then I thought, ‘Why aren’t you at the church? You’re probably some Godless thief.  I’ll bet that’s exxxactly what you are’  as I narrowed my eyes on his blue polo-shirted back.  After that, I vowed to let tradesmen in as little as possible.  You just can’t trust anyone Sis.  And I say that not from experience, but from paranoia.

Finished “Trainspotting” last night.  I enjoyed it immensely.  Good read.  I tells ya Sis, that TV carkin’s it was the best thing ever. Isn’t it stupid?

God, I don’t know why I go on with that kind of crap.  It’s not even interesting when I read it back to myself, I shudder to think how dull it must be to you.  Alas, this is the withered fruit of a stagnant social life. 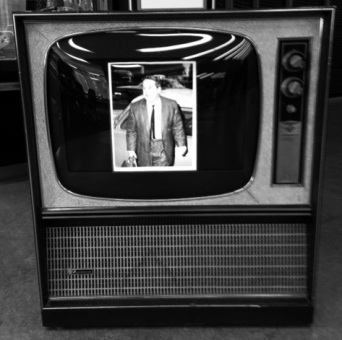 2 thoughts on “TV is the great blight of my existence, and it must be excised from my life.”