How’s the incubation coming along?  Have you been taking measurements of your mighty girth?  You really ought to you know, it’s the sort of thing you can use against the bairn when it acts up – “You know my stomach was bloated to one hundred inches because of you!!  You’ve ruined my life! Get back in the cupboard you LIFE SUCKING PARASITE!”  Or something like that anyway.  Mum will be able to clue you in on all this sort of stuff.  Remember how she would point to her varicose veins and say “You did that to me.”  Then you’d go and clean your room or something.  You know they should dovetail emotional blackmail classes with those breathing classes.  I mean, you’re gonna use that breathing stuff once, maybe twice?  Emotional blackmail you’ll need every day.  You should learn some of the basic choke-holds too.

I get to go home early today.  Mum’s getting some handyman to come around and put some trellis up on top of my dwarfen fence to keep out the nasties.  Then I’m a-gonna grow me some ivy on it to stop the neighbors lookin’ at me ever’ time I do sometin’ in the backyard.  The fences are so low at the moment, I feel like I’m on display every time I go out the back door.  I always have to peek out the back door to make sure no-one else in the group of six terraces is in their yard.  I don’t want to run the risk of starting a conversation with one of them.  I couldn’t imagine anything worse than a neighbor dropping in for a chat.  Hell, you’d have to keep your house clean all the time, just in case.

Hey, guess what? I got felt up on the tram today!  Someone brushed my bum with what felt like the palm of their hand as I was alighting at Collins and Exhibition Street this morning.  I hunched my shoulders instinctively as I flew from the tram, not looking around to see the culprit.  It was probably an accident, but I thought, “What if it’s some hag with no teeth and a degenerative skin disorder?” – I couldn’t bear it.  So I scurried through the traffic, preserving in my heart of hearts the notion that someone (someone unseen, someone possibly very sexy),  on this day, might have found my bum fondle-worthy.  (If only they knew it more intimately, they’d be keeping their distance.)  Heck, it was probably someone’s handbag or briefcase, but it doesn’t hurt to dream.  Still, people ought to keep their hands and handbags and briefcases to themselves.  Maybe I should have shrieked and turned around to slap someone in the face for their “roaming hands”, denouncing them in as loud a voice as possible as a desperate pervert.  At least it would have been a little more entertaining, might have broken the morning commuter tedium for the other passengers.

Then, I get to work and someone in the office suggests I should have taken the whole day off and phoned in sick with a “virus affecting my genitalia”. This is the sort of thing I have to put up with at work.  Forty-year-old virgins talking to me about my bits.  I’m getting close to launching a sexual harassment case against this person (who I won’t mention by name in case this letter falls into the wrong hands and I find myself being sued for libel).  Ms X is always touching me, leaning over me when I’m sitting down.  I remember once she had a camera and offered to take a photo of my bits.  She’s always making lewd suggestions to me, touching me on the shoulder, rubbing my shoulders, even touching my face on one occasion.  I can’t stand it.  But then again, I can’t bring myself to tell her to bugger off.  It would be so insulting, especially if they don’t know they’re doing it.  I think it’s even worse considering that she’s female, because women don’t get rebuffed as often as men.  As a matter of fact, women hardly ever get rebuffed, because most men are convinced that if they don’t take every single opportunity for sex, they many never have another one again.  Every root might be the last.  That’s why they’re so desperate all the time.

It happened again today.  Just about fifteen minutes ago, she came in and rubbed my shoulders from behind as I sat at my desk.  I’m marking them all on the calendar now.  Every day that I feel harassed, I’m putting a big black X on the date.  It’s been getting worse the last few weeks, and now that I’m painfully aware of it, I realize how often my personal space is being invaded here.  If it happens again tomorrow, I’m going to say something.  I was rehearsing last night – “Ms X, don’t take this the wrong way, but I really don’t like being touched.  It’s a thing from my childhood.” That vague, veiled reference to an implied incident in my childhood will hopefully make her think twice and she’ll take pains to make sure it doesn’t happen again.

The handymen (there were two of them) came around last night and did the fences.  They’re nice and high now.  They put up curtains in the front room too, which kinda makes it a bit more cosy.  In time for Winter. 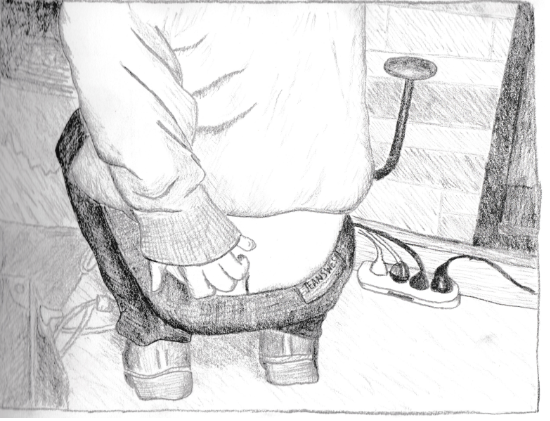 The above sketch by J is based on the photo below. His sketch was done in 2002 but it went so well with the theme of his letter I included it. There are other sketches of the same photo using different methods, but I know nothing about art. S

One thought on “Guess What?! Someone unseen, someone possibly very sexy, on this day, might have found my bum fondle-worthy!”