Whacko! New Discipline J is rearing to go! Yessiree. Up at the crack ‘a dawn. (Ten past seven – close enough.) I feel good. I was up early, I did a load of washing, I even included two extra ingredients in my sandwiches today.  I feel good.  I didn’t even pig out last night – I’m on the Wagon o’ Weight Loss, Sis. You know I’m even trying to work harder. The new leaf, turned over. It’s easy to be this excited about such small gains when you have so far to come.

Just spoke to that spectacularly attractive woman that I was fretting about last letter. It was in the tea room. She’s nice, quite forward, a bit imposing, but pleasant I guess. She made fun of me using the word flurry to describe a gust of snow. Makes me a bit twitchy to tell the truth.  The conversation turned from recycling plastic bags to disposable nappies. She said she “doesn’t have a problem with poo.” This makes me a bit queasy. I don’t think I could ever quite relax around someone like that. I prefer my friends to have something wrong with them, if you know what I mean. I think that beautiful, intelligent people at ease with themselves might not have as a complete understanding of what it is to suffer as ugly, defective people do. Maybe that’s facile and ill-conceived.  I’m certain my idea of suffering is embryonic compared to that of a Guatemalan Freedom Fighter. I’m not sure, it’s only just occurred to me to try and put this one to paper. Sometimes you just can’t hammer a thought out properly onto a page. I’m getting off the track here aren’t I?

Hey, did I mention my diet? Oooh yeah, Mr Blimpo is on the reduction trail. I just re-read this letter. I mentioned it only this morning. I’m losing my marbles. Anyway, I can feel the pendulum swing. I’m truly getting into the psychology of self-denial. I’m sure you know the tune, hum along with me. Today’s denials include the scraps of this morning’s sandwiches (you know, the bits that fall out the side when you’re making them), the Potato Wedges in Sour Cream (I give them proper noun status, they’re sublime) that Simon was just waving under my nose, and the 30 grams of M&M’s that I normally buy around now to go with my second cappuccino. That and the hour and a half of walking every day should shift this flab in time to look fab for summer! (Advertising has no effect on me. Advertising has no effect on me. Advertising has no respect for me.) I’ve gotta fit into my skinny jeans again, it’s simply too embarrassing. And Mum’s no help. Do you know what she did today? She mailed me 7 two-for-one deal coupons at some ice-creamery in Melbourne Central! Niiiiiiiice.

Started my new Herman Hesse novel today, “Siddhartha” (I think misspelt it in last week’s letter). I like it, I like all his books. There’s something about his prose that’s so limpid, I think it might have something to do with his interest in the collective unconscious. I think he must tap into the imagery of the collective unconscious to make it so familiar and seem so true. There’s a quality of perpetuity to them, and a clarity, every sentence is like a diamond. God, how gushing. I’m no literary critic, that’s for sure.

“Siddhartha” is about Buddha and so on. I’ve only read thirty pages so far, but the narrative is pretty sparse, and it moves along quite quickly (I’m doing it again), but what’s caught my imagination is the asceticism of the peripatetic Indian holy men. There’s something in that whole self-denial thing, that annihilation of the Self that always appeals to me, inspires romantic notions of escape from banality. Heady stuff. Of course I’m far too lazy to ever embark on any of the exercises that these guys undertake – fasting, pain endurance, meditation… I can’t even keep my feet still, let alone my mind. Anyway, it’s only romantic posturing.  I’d have to say I’m a good old head-in-the-sand solipsist in the final analysis.

Fume fume fume. I’m so damn sick of working with complete tits! I’ve just discovered that one of my underlings has been whacking people into the book without de-duplicating them. OK, background: in the land of “Who the Fuck Cares”, the currency is people. We put new people in the book every day, and it is of paramount importance that we don’t put the same person in twice under slightly different names (a lot of these bozo’s have 3 or 4 positions on various boards). When there is a person in the book twice, the superfluous entry (like counterfeit money, to continue the metaphor) is called a “dupe”. What I discovered today is that Ms X has not been de-duping entries. She has not been taking the time to call the companies and say “Is you V.P. Finance, Mr Smith also on the board of Shell?” She’s just been keying them all in with a cursory “Possibly dupe” in the file notes. The file notes that aren’t accessible, they’re meant to be for things like “Watch out, this guy’s nasty” or “His secretary, Brenda, is more helpful – get info from her.” I could fucking scream!

So I went to her and said, Hey Ms X, don’t be puttin’ none of dem doop files in no more, and instead of just doing it, she had to argue her point. My point is that it’s my book, and I’ve been doing it for four years, and I know it better than anyone else. I mean she’s a fucking assistant. Aren’t they supposed to do the tasks you set out for them? I am now at my motherfucking wits’ end Sis. 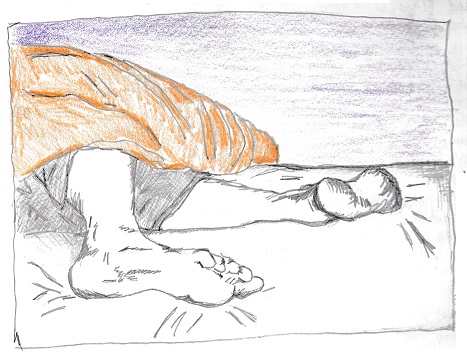