I don’t have much to report other than the joy that the MOLE IS DEAD!!!!  The Environmental Health man came out and put down some poisonous gas, – “used this stuff in the second world war luv, keep ya kids inside wont ya – not Jewish are ya, hate to offend ya”.  Sweet Jesus, I couldn’t believe my ears!

Anyway I nearly stepped on Mr Dead Mole and of course shrieked my head off and jumped up on the kids slide. I thought it was just its’ leg sticking up – you know one last attempt to reach the surface, and then I thought that it was alive and it would attack me for trying to gas it. So Barry came out and picked its’ cold hard little body up – IT WAS TINY J how the chuffing hell something that small made so much mess and caused me so much misery I do not know.  Actually he was quite cute and I felt guilty but then I just took one look at my lawn (it honestly looks like something out of a fucking cartoon) and I didn’t feel so bad.

Whilst surveying the back yard Barry says to me;

“What has happened to the corner tree?”

“I chopped it down.”

“I chopped it down before it took the fence down and knocked one of the kids on the head or they garroted themselves on the absolutely useless intricate network of rope and twine that you had tired around all three trees.”

“I chopped it up into tiny pieces and distributed around the estate at midnight one-night last week.”

“You heard me and if you ever leave another job so long again it might be you getting chopped up at midnight into little pieces and distributed around the estate.”

He hasn’t quite looked at me the same since. I reckon he would repaint the house purple now if I told him to. Heehee.

I love you.  Hey, what happened to hairy bum?

Aw, the poor little bugger. Poor Moley. Hope you never read Wind in the Willows to your kids. Still, if they kick up a stink I guess you can always “chop them up into tiny pieces and distribute them evenly around the estate”. No wonder Barry’s lookin’ at you funny – downright creepy Sis!

Hairy Bum has actually been dumped, (hurrah!) but last night Lena was saying she wanted to take him back (boo!). It’s up to me and Jade to stop her! I tried to insinuate last night that the lack of passion in their relationship might be a bit of a drawback, but it was too subtle (that’s always been my downfall, ha ha).

Went out again last night cos Jade had her writers’ group meeting at our place. I told her I wouldn’t sit about while Communists sipped tea and plotted the downfall of Freedom. So I called up Louise and we went to the Black Cat in Fitzroy and saw Mark Trevorrow sing some cabaret tunes. He’s bloody good, you know. He’s the guy who does Bob Downe, do you know him? The terrible seventies suits and scarves and wigs and those huge white teeth. He really can belt out a song when he’s not hamming it up as Bob Downe.  Louise and I didn’t book a table so ended up rounding out a table of ten which turned out to be filled with Mark Trevorrow’s family and friends so we got to eavesdrop on his chats between sets. He’s really funny. Ah, J The Starfucker Extraordinaire! 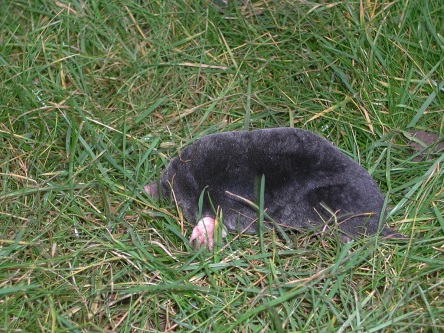 A picture of the tiny mole that wreaked untold havoc in our backyard.  Oh the guilt I felt once I saw just how tiny and how dead he was. Sorry Mr Mole.